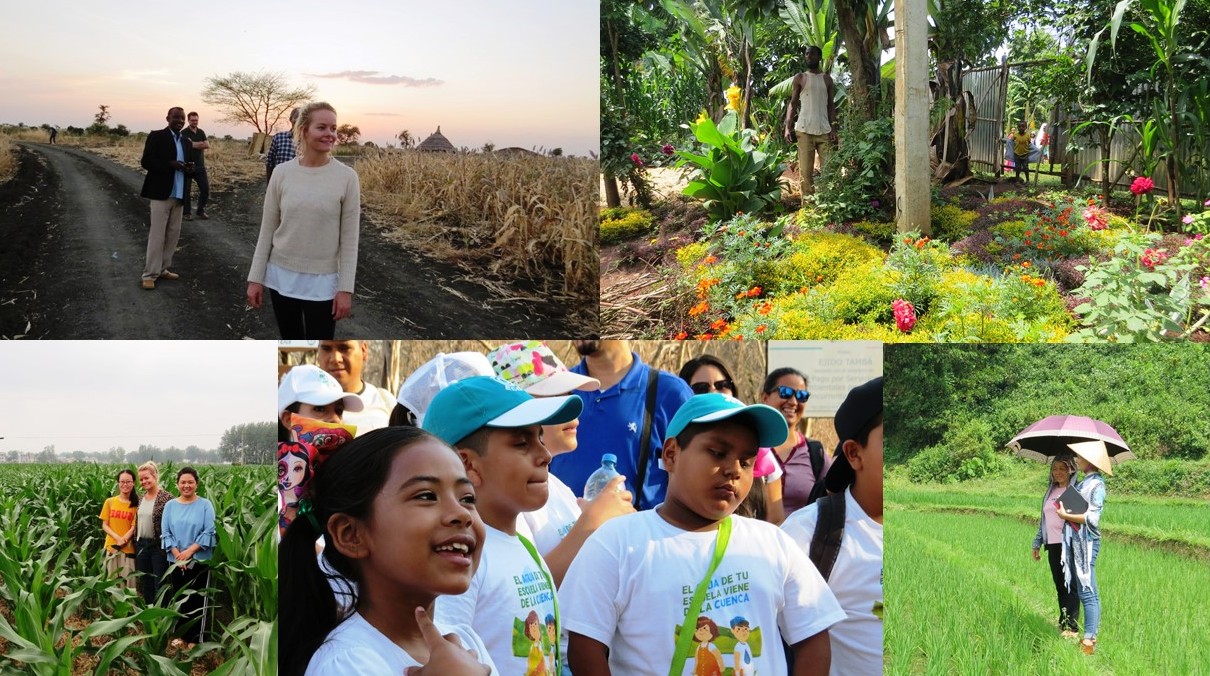 For this weekly, after having been quiet for a few weeks, I thought to ramble on without purpose about a few thoughts and feelings conjured up from my recent travels. I find myself in Mexico after having taken a life-changing decision to pack my things and move around for a while. Those of us who work in the area of sustainability will know the desperation, sense of urgency, helplessness and sometimes hopelessness that comes with the work. Knowing that humanity will face collapse if it doesn't change, radically, as soon as possible, is not something that one can brush away. The fact that the system that is taking us there is so entrenched and that so many people go on with their lives as if this reality is not in existence makes one feel even more hopeless. Many of you know I have been trying to incite change through Progress Namibia, and my colleagues and I have been working on this for a number of years - but no matter how much we do, it never seems to be enough. How do we make a bigger impact, more quickly? This is what my learning journey is going to be about. How can I learn from other institutions working on sustainability issues around the world - how are they coping, what are they doing, how does their organisational structure work? These are just some of the questions I would like to answer. So, I start in Mexico. Working with a small watershed management NGO in Mazatlan.

The last few months before my Mexico move though, I had a few small journeys already, as part of my work with the UN. In the beginning of the year I was part of a team travelling all over Sudan to develop a project there on ecosystems restoration, agriculture, tourism and protected areas. Many of you may know that Omar el Bashir has finally stepped down after the people had been taking to the streets to try and change to a more just government - unfortunately the military took over, but perhaps things are improving now that protest leaders and the military council have signed a power-sharing deal to pave the way for transition to civilian rule. We will have to wait and see. But with a collapsed economy, life is tough for my dear Sudanese friends. Especially the small-scale as well as the nomadic farmers, who have lost more and more land because government has been renting the land to rich Saudis for large-scale industrial agriculture projects that not only produce value-less high priced export crops, but are destroying the soil in the process. And there is little we could really do to change this. It is the land tenure system that is the problem, and the little guys are suffering. What else is new. So these poor souls end up illegally going into the national park to graze their cattle. There they have conflict with lions, introduce alien invasives (through cattle defecation), and face many more problems. Why do we struggle to enable and support the most important people in our society? The ones who put food on our plates? The ones who look after our soil, our water, our air? Why do we instead enable those who have not evolved and lived on this land, do not understand or feel connected to the land, and only want to use it as a linear resource that can be destroyed in the name of a fake gain? I felt sad in Sudan. But I also felt hope and inspiration. Mostly because of the people I was exposed to, the friends I made. The depth of humanity. We are all the same, and yet, so different. There indeed is something so very beautiful in that.

And this very human connection carried me through the work in Ethiopia, China, and Vietnam. For those three countries, I was on an evaluation mission. I was commissioned to evaluate a project that was looking at the effects and uptake of biochar across farming systems, and how this may be used to improve and entrench sustainable land management in various agricultural areas around the world. I started in Jimma, Ethiopia. The origin of coffee. There I met Ibrahim, a farmer who had taken up biochar and was vastly improving his farming style, increasing land, and producing a healthy, abundant and diverse basket of crops (mangos, coffee, vegetables, maize, avocados, you name it, he was growing it). The soil, thanks to his farming methods, and the input of biochar and manure, over the past three years, was rich and healthy. Other farmers had started to show interest to copy his methods. China was a bit different. They have very top-down approaches. After years of radically fast economic growth and dirty production, including in their agricultural system, the government has realised that the growth has come at a higher cost than the return, and they have to change track fast. In the agricultural system this means that they have banned burning in the field (i.e. rice, wheat and maize straw) and have a directive to reduce fertilizer use by 20%. In other words, they now have this surplus green waste they need to get rid of - so what is easier than to turn it into biochar, add it into the fertilizer (20% substitution) and make compound fertilizer with it? So there is a value chain supporting the biochar industry, and lots of funding going directly to the university to do their studies on biochar application, carbon sequestration, and the like. In Vietnam, things were a bit different. Small-scale, mostly women-led farming systems. The farmers could clearly see the benefits of biochar on the soil and crop yield productivity. But the social dynamics of the area where it was tested is changing, and moving interest (sadly) away from farming. Big infrastructure development, including a large Samsung factory, has increased job opportunities for the younger generation, but has displaced society. The younger (wo)men are off to the factory while they leave their kids with the grandparents; and less and less time is available to farming. Farming does not bring in near as much money as other work, so farmland is rented to the more desperate and short-term lot, and fertilizer and pesticides are short-term heroes, long-term enemies. For many, this transition has brought material gains, but social fabric and connectedness to place is being lost. It made me wonder why farmers are so undervalued and underpaid (next to even low-scale, assembly-line, factory work), when, really, they should be among the most valued. Someone who can grow food, and sustainably do so, should be high up in the productivity food chain....not low down. That kind of skill is so much more valuable, than, say, a portfolio manager/investment advisor (which, by the way, according to a study, a cat could do better!). It made me also ponder about how we structure the economic system - why does the economic system have to destroy so many things in the name of a more materially comfortable, prosperous life? Surely, we should not have to sacrifice so much? Especially, we should not have to sacrifice the basic necessities of life - clean air, water, soil, human relationships, and so forth.