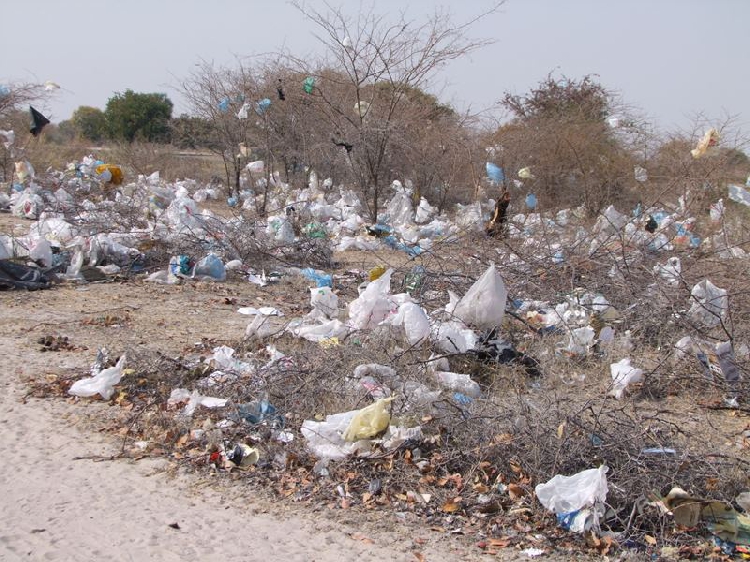 You drive anywhere close to a town in Namibia, and you will undoubtedly see non-biodegradable polythene bags stuck to a bush, or blowing across our desert landscape. Did you know that it takes thousands of years before one plastic bag can turn in small particles? Plastic bags can choke or poison fish, mammals and birds, with marine wildlife particularly vulnerable. In fact, 46,000 pieces of plastic are floating on every square mile of ocean. When marine animals ingest even small particles of plastic, their gut is blocked often resulting in death. In Namibia, plastic has also caused harm to livestock.

Plastic bags consume resources, including oil, in their creation. Up to 100 billion barrels of oil are needed to make the world's plastic bags each year. Yet the typical usage of a plastic bag is about 20 minutes. How ridiculous is that? We risk our future with climate change, pollute our marine and water systems, create a littering disaster, kill other species, all so we can carry a few things in a one-use bag?

Our government has been talking about levies on plastic bags for years now. Last week, the Environmental Economics Network of Namibia (EENN) in cooperation with the Namibian Scientific Society hosted an after work talk on the introduction of the plastic bag levy, whether this is an option for Namibia. In fact, the Namibian Scientific Society, together with the Chamber of Environment, among others, have been running a campaign since the beginning of this year towards a plastic free Namibia.

Some items of production should probably never have been put into existence. The plastic bag is one of them. Even those of us who cannot afford a levy, most probably are able to re-use some form of carry bag? This is an item that we should not take for granted, something that we carry with us at all times. Those of us with our bread buttered every day have no excuse. There is absolutely no reason to consume plastic bags when one has easy transport options and means to re-use a bag (that was bought for perhaps NAD 15 at some point and can be re-used over and over again).

Let's look at how some other countries have tackled this issue. Many countries have been trying to phase-out lightweight plastic bags. Some have gone the levy route, such as South Africa, UK and Botswana. Others have completely banned plastic bags, such as our African counter-parts Rwanda, Mauritania, and Eritrea, among others. Morocco banned the use of plastic bags nationwide in 2015, and the country was the second largest consumer of plastic bags in the world (after, surprise, the USA). Rwanda is perhaps the most popular example, having pioneered their ban years ago. Kigali, the capital, has been awarded Africa's cleanest city several times over. We Namibians who think Windhoek is clean have not wandered further than our bubbles of comfort. Next time you go grocery shopping. Or buy a pie at the service station. Ask yourself. Do I really need a bag? And if yes, does it have to be plastic?