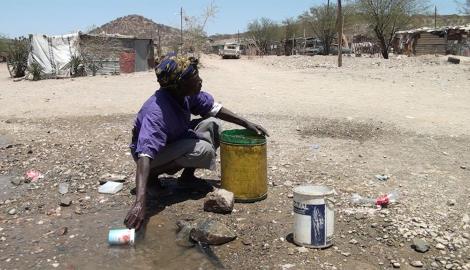 Almost every day for the last month we have stared at the cloudy skies with hope that they will break and deliver us with much needed rain. They group, grow, and darken the sky, and then dissipate like the dust from a dry riverbed. Every one moans.

I look at the land, the birds, the animals, and feel (or more accurately project) the desperation they must feel. And feel, strongly, my guilt and a sense of hopelessness about humanity's role in this desperation.

People in my neighbourhood complain about their (exotic) plants suffering in the heat, and that they have to water them more than usual to keep them from dying (someone told me the other day they do this mid-day to cool the garden down). What? We are in water crisis mode - I must have missed the memo by the City of Windhoek even though I felt that we should have been 'left' the water crisis we were in in 2017 - but read that this water crisis mode was the modus operandi (again since August last year) in the Namibian today. I say that we are in water crisis mode to remind people that keeping your exotic plants thriving is not exactly the priority right now. The priority is to use water sparingly. Even if that means re-thinking the plants that you planted in your garden in the first place. Since when is an indigenous garden not more appropriate and beautiful? Anyway - that is the least of our problems. Most Namibians have to bucket water from a communal tap. Some have to walk for kilometers. Even in and around Windhoek. What if that taps does not run anymore? What if yours doesn't? Will you then realise that wasting water on washing your car, watering your European manicured lawn, hosing down the pavement (yes, people still do this!), letting your kitchen sink tap run and run, was a ridiculous thing to do?

And in the mean time, we carry on (and I talk about humanity as a whole, not just Namibians - who, for sure, are not the main culprits in this - although us in the echelons of the middle to upper class are certainly part of the problem) living lifestyles that contribute to climate change, that in turn contributes to the lack of rain. So instead of being up in arms and 'helpless' in the pit of despair about the drought, think about your responsibility and role in this. It is not just about doing your part either, it is about holding others accountable, and being part of the bigger change. Stepping up as a global community - even if it means having to call out bad behaviours and participating in public (national and global) discourse. Empowering yourself with knowledge.

Don't get me wrong: I will be the first to admit I should be better about my own water use and waste. I have also let things slide when I should have stepped up and said something. I am working on that. I am also working on our role as humans in this world and how we can improve that role so we don't destroy ourselves, dragging mutually evolved biodiversity with us in the process. Will you join me?