Fuel prices are increasing: could this be a good thing? 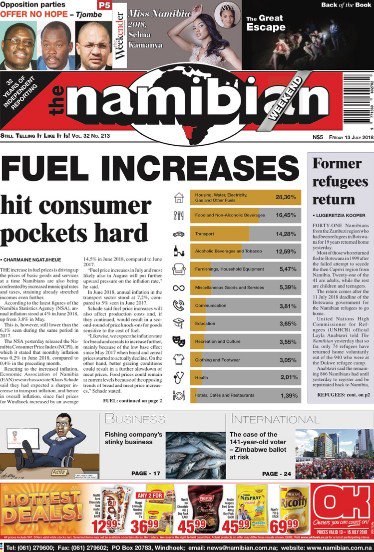 The fuel prices are going up, and everyone is in high distress. Of course, in our current system, increasing fuel prices will inevitably increase the prices of goods and services, and have a general knock on effect on all sorts of things. I see this and think maybe this is the opportunity for most of us to be forced to drive less. Perhaps even there might be increasing investment and creativity pumped into the transport sector - not only in transporting ourselves around, but also all our commodities. See, I see this in the context that we - urgently - need to shake up the system. We might think the costs of re-thinking transport in our cities, and in fact transport globally, is too high cost. Either way this is an inevitable future we will have to go towards though. And if we do not do this sooner rather than later, this cost will be nothing compared to the environmental and economic collapse we will face. Perhaps some of us need to connect the dots and do a bit of systems thinking. Remember traffic jams? Remember pollution (roughly 7 million people die each year as a result of air pollution)? But, most importantly, and the one that will change things for the worse if we do not radically change our systems asap... Remember climate change? Caused mainly by the burning of fossil fuels? I decided to look into the linkages between oil prices and climate change to get an idea of how interlinked the two are. But first, let me remind you about what costs will come if we do not take charge and take the radical steps needed to transform to a human society that not only survives, but thrives, on our home planet.

We decided to do the bare minimum when the global community signed the climate agreement in Paris a few years ago. This was a huge step...but it is still the bare minimum. This is the radical transformation that we are talking about. If we manage to stick to it, i.e. warming up to 2 degrees only, then we will still face the following: 24% of humans will face water crisis issues in the coming decades, 35% of coral reefs - which provide sustenance (and obviously are linked to all sorts of general global good for species) to 500 million people will completely degrade, we will see heat waves and floods, droughts and other extreme weather much more than ever before. Such changes directly affect our production of food, as well as a myriad of other things. Our economy as we know it now will not be the same. But we will survive, and we might even come out a more resilient and conscious society. To do this, we will have to keep all new (found) fossil fuel in the ground (particularly the hard-to-get 'dirty' oil).

If we decide to do even less, or nothing at all, (as is the current situation - because we are not prepared to change our economic structures), we will likely not survive as a species (with the poor, who have had no part to play in this, likely to go first). The world will tip and most of the species on this planet will go extinct, which of course includes us. We cannot even comprehend the type of crises we will face. Current economic and environmental devastations, refugee crises, war, food and water crises, are nothing compared to this new reality.

So this said, to me, I would rather get an individual shock like this in the move to a greater good. A shock that might push us in the direction, collectively, to transform systems like our transport system. It will not be comfortable at first, but it will avoid a situation where comfort is a word that won't exist in our dictionary anymore.

So, will rising fuel prices actually make us change?

Let's take a look at some opinions on this:

Turns out it is much more complicated than that. First off, it is important to know why the fuel prices are increasing. If it were because of a carbon tax (i.e. paying the real cost of fuel, not the heavily subsidized cost), then perhaps it would be a 'good' thing. But it is not. In fact, it is due to multiple factors, including the political turmoil in Venezuela, the US sanctions on Iran, as well as a simultaneous worldwide increase in demand. In other words, nothing to do with climate change mitigation strategies. This reason is therefore more unhelpful, than helpful, towards transformation.
In this sense, lower fuel prices would be better than higher. I know, this sounds counterintuitive.

An article in the Guardian put it nicely a few years ago: Due to the brutal, counterintuitive logic of the petroleum marketplace, the lower the global price of oil, the more it stays in ground. We have to remember that most of the easy oil is gone. What we are globally left with now are the high-risk and high-cost (and very environmentally degrading) extractions such as the Alberta tar sands, deep-water reservoirs off Brazil and drilling the high Arctic (God help us). Companies that hope to profit from the last dregs of the dying petroleum age need to convince their investors to spend huge amounts of capital in the hope of competitive returns decades down the road. So, basically, anything below USD 75 per barrel of Brent crude oil means that companies cannot profitably extract more than 360 gigatons of the world's remaining reserves. If oil was kept below this price, we might keep to the budgets Paris was talking about regarding the below 2 degrees scenario. According to a scenario like this, a key measure of our success in controlling carbon emissions would be keeping commodity prices of oil low. It is important to realise that almost every policy intervention to avert climate disaster is directly or indirectly aimed at lowering the profitability of fossil fuels such as oil. Here is the catch though. This would decrease supply. But high prices come with high demand. And, we still have large demand for it. Thanks to our transport dependency on oil. We are addicted to our fossil fuel cars to move us and our things around.

So, we will pay more and complain about it, but we will not drive less. We will not innovate in the transport sector unless we reach some threshold or collapse. We could avert this threshold by knowing that it is coming either way, and start changing incentives up through government interventions to allow the private sector to innovate fast and creatively in the transport sector. But this will take collective intelligence. Do we have this collective intelligence is the question.